The three of us started out as early as 7 in the morning today. Where we headed to was the cocoa fields in the high ranges of Idukki; and what we expected to procure today, was nothing less than 2000 kilograms of freshly cut wet beans of cocoa, all organic and of the best of the state quality. Yes, we could smell it…

Our destination was the High range Development Society, and we reached there by 9 am. Looking at the sky it seemed to like we were going to have an almost pleasant day ahead. It was only last week that we had to cancel our first procurement plan because of the rain. It would be nearly impossible to commute around these hills in case of a heavy rain. Roads would be blocked out by giant trees fallen off by the wind, or the road itself would disappear over the landslides and that’s just very usual here. But today it seemed okay.

Weather check? Okay! Our pickup, the driver? Ready! And hence the three of us plus a staff from the HDS and the driver starts out the mission today by 10. Our objective today – 2000 kgs of freshly cut cocoa beans, only organic, in the next 8 hours.

Mr. Mathew was the first farmer we met today. We had already met him once when we came looking out for potential producers at the beginning of our project. The cocoas were already extracted out into several buckets of fresh beans by the time we reached. He and his workers had already started the job early morning itself expecting us today.

We had already given our directions to the farmers as not to cut out and extract the beans prior to the day we arrive. The plan is to take the wet beans directly to our fermentation unit by the same evening and hence have evenly fermented beans all ready to be exported out in utmost quality.

We weighed the cocoa then and there at Mr. Mathew’s house itself and transferred it to our own crates and was loaded onto the pickup truck. The crates are huge plastic boxes with holes all around it for air flow. But those air holes on its sides were to be covered,  for we could not compromise the beans only on its sides drying faster with the wind. But we had it all planned out. The solution was simply to use some fresh banana leaves to cover the crates first and then fill the beans. We got about 75 kgs from him alone.

And also, then and there, we directly paid the farmer after weighing his produce, in cash. We had done our job in making sure that these cocoas were purely organic, freshly cut and we strictly sorted out only the finest quality beans for our need. The farmers were a little distressed in this picking out of even a single feverish bean out of the crate, but this was compensated by the premium cost that we benefit our farmers. The premium is for their trust and the certified organic beans they provide. Good things are worth it, right?

We then moved on to the next farm, and to the next, with no breaks at all. Some of the farmers said they did not expect us this soon and they were still on the process of extracting the beans. Hurry guys…we wanted to say. We decided not to wait and collect it on our way back and moved on to the next farms. Not all farmers in the area were huge producers of cocoa like many.  For the smaller farmers, the HDS had decided few collection points where four or five would assemble with their produce and we would collect it there. It was also not possible for us to go into each and every farm, not only by the restriction of time but also for our vehicles literally could not climb up all these fields. Heavy work, of course.

One such pickup point was a small town for the local people here with a few shops with all the essentials needed. Many shop rooms were very old fashioned with almost tumbledown roof tiles and long verandas. It was on one such veranda a few farmers brought their produce. It was almost noon and by that time most of these small-scale farmers finished cultivating the beans and were ready to hand it over. That was also the perfect place for us too, as many in the town came and enquired to us about this new venture. Marketing us in a market!! We quickly weighed each of their produce and settled their amounts then and there. The extra premium they could benefit from us was certainly an appreciation they very seldom got for their extra efforts in retaining their farms organic against all odds in today’s market. It takes a strong fish to swim against the current… Even a dead one can float with. And it’s true.

We continued to further farms and fields that had informed us that they’ll have the beans ready. But even then a few large-scale farmers were still extracting the beans out of the cocoas when we reached them. The farmers along with a few helpers would be sitting in midst of several piles of cocoa pods discarded after extracting the pulp and the seeds in them. The extraction process happens very quickly for these veteran farmers. It’s a matter of only a few seconds with every fruit. Masters are always masters. And we could see that there. Each fruit may contain 10 to 25 beans all molded together by the fresh cocoa pulp.

We tasted a few samples too. It’s a lemon-ish soar like taste to have a fresh cocoa fruit. It is the fruit pulp that gives this taste. The fermenting process, that is all of this fruit pulp has to vanish to give fine cocoa beans its color and taste. This drying process is also called sweating. And that is the next step.

The best and easiest means of doing so is simply sun drying. But we have faster and more efficient ways of doing this today. And that is the next stop-point for us, our fermenting unit at Ramapuram.  By 5 pm, we wrapped up our procurement rally for the day and traveled to the processing unit with all the 500 kgs (Yes! Only one-fourth of our target) of wet beans that we have got today. (Meanwhile, we had our lunch at about 3 .30 from a small naadan – hotel at Murikkassery.)

And after reaching the fermenting unit, we once again weighed the total collection. It was 50 kgs less than what we should have had by the calculations. This weight loss is reasonable, it’s because of nothing else but due to the fruit pulp getting liquefied and getting drained as water. And that was about ten percent of our total collection that we lost in commuting it to our unit.

We got back to our office in Kochin by about 9 pm and so there we called it a day. That was it, not a great start but we now know what all we have to keep in check for the next week. 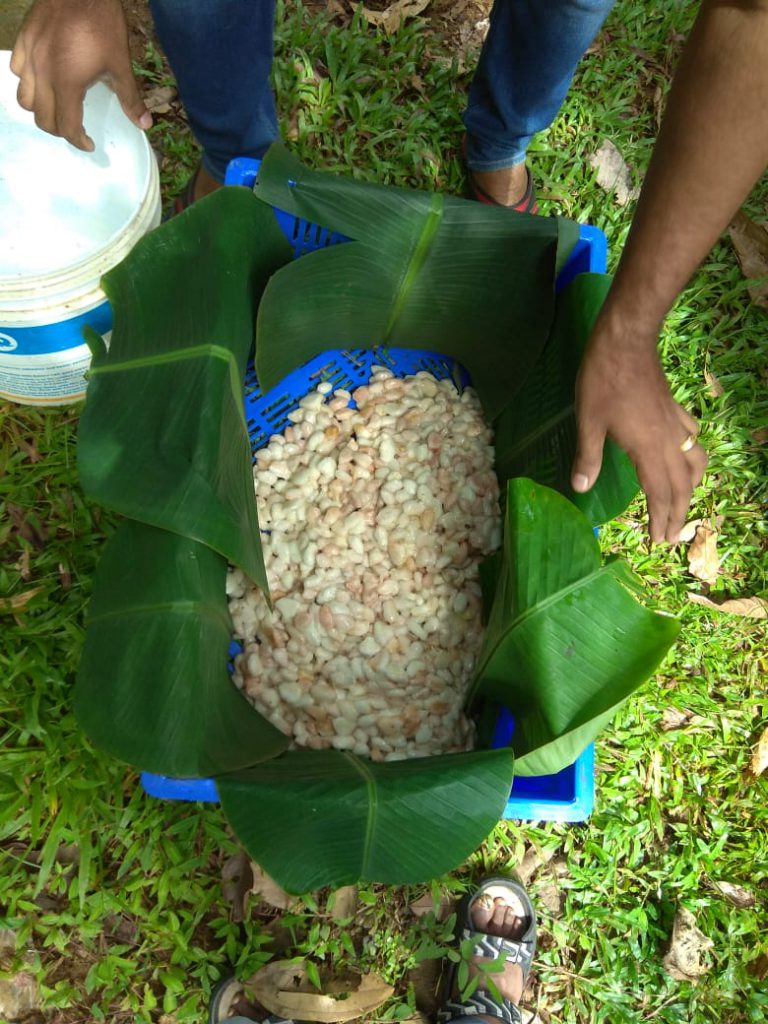 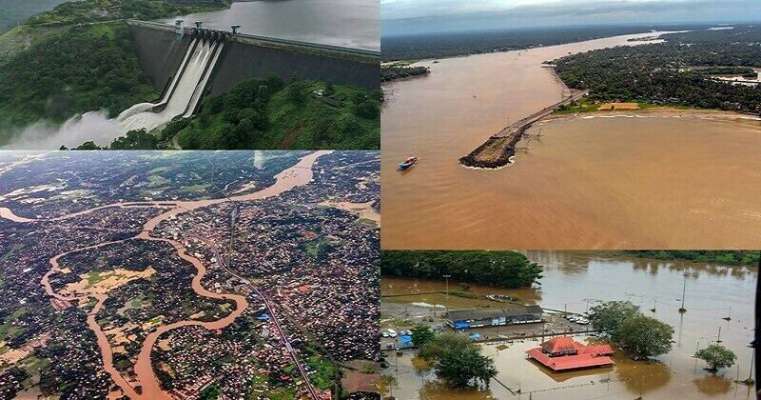 August 19, 2018 Floods/Landslides Kerala at its biggest challenge in the century Read More 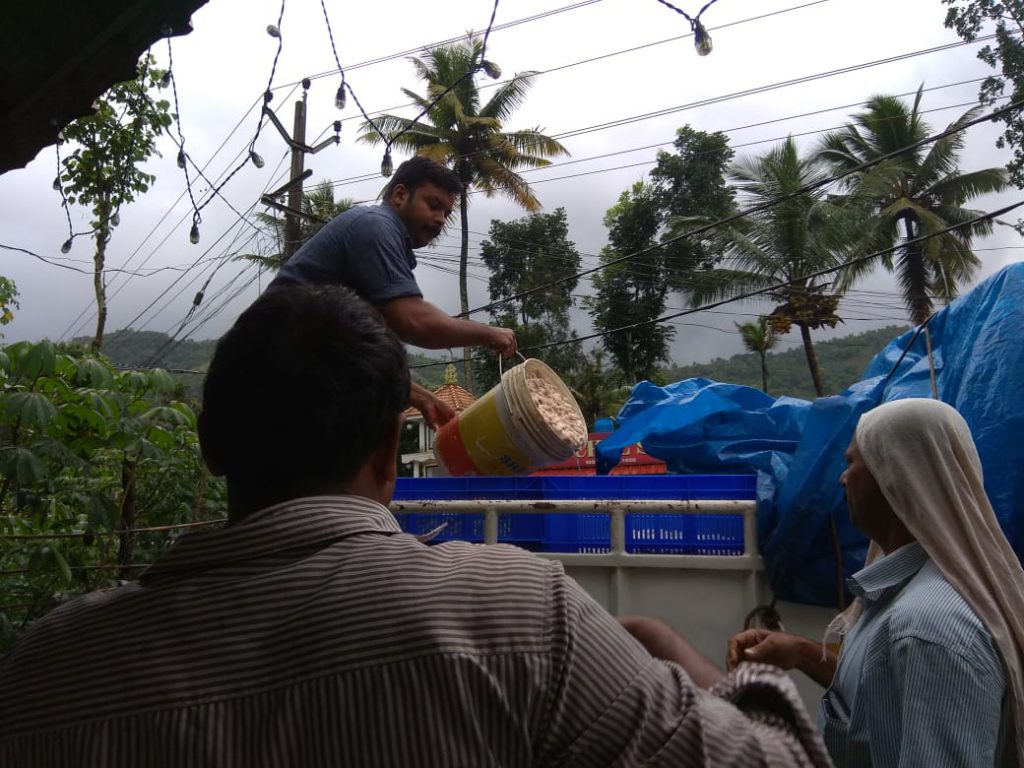